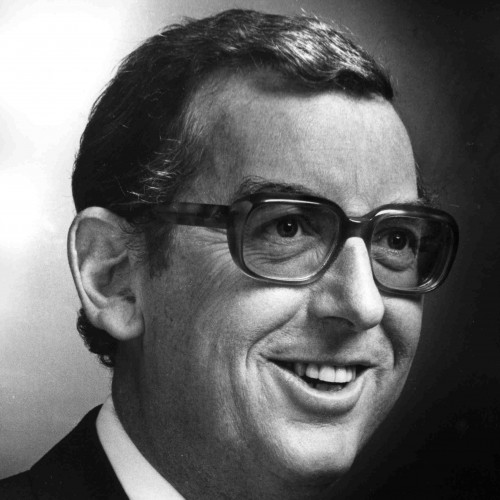 The eldest son of Alan Sainsbury, John Davan Sainsbury joined the firm in 1950. He began his career in the grocery department, before taking responsibility for buying biscuits in 1951. He masterminded the development of the production of Tendersweet bacon, leading to the formation of Haverhill Meat Products, after a visit to Canada inspired a new method of producing bacon for the new self-service market. He oversaw the development and growth of own-brand Sainsbury's lines. The success of these products lay in their quality, ensured through rigorous testing and checking throughout the production process. Packaging design was another key factor in the success of Sainsbury's own brand, and John Davan took an active interest in this, personally approving every packaging design that came out of Peter Dixon's design studio. In 1969 John Davan became Chief Executive of Sainsbury's, and managed the company with his brothers Simon and Timothy and cousin David Sainsbury. Between 1969 and John Davan's retirement in 1992, J Sainsbury Plc recorded a pre-tax sales growth of 19% per annum and a pre-tax profit growth of 24% per annum.

John Davan was at the helm when the company was floated on the London Stock Exchange on 12th July 1973, widening ownership of the company and providing an extra source of capital. This transition from public to private status was reflected in changed structure at top management level: in 1973, five of the ten board directors were members of the family. John Davan led the company through other significant changes, including conversion to scanning, the introduction of debit and credit cards, and energy management. John Davan Sainsbury's commitment to customer service and ability to foresee changing needs and adopt new technologies helped guide Sainsbury's through a period of growth. He was knighted in 1980 for services to the food industry, was made a life peer with the title Baron Sainsbury of Preston Candover in 1989, and created Knight of the Garter in 1989.

John Davan was an active patron of the arts, serving as Director of institutions such as the Royal Opera House and Rambert School of Ballet and Contemporary Dance, as well as chairman and trustee of other cultural institutions. He married ballerina Anya Linden in 1963, and had three children Sarah (b. 1964), John Julian (b. 1966) and Mark (b. 1969). He remained life President of J Sainsbury plc until his death in 2022.