The plaque on the wall of the car park reads “This is the location of the ancient Jewish cemetery of York. Some of the remains were re-interred 8th July 1984 – 8th Tammuz 5744 – in the presence of the Chief Rabbi Sir Immanuel Jakobovits and representatives of the Jewish community. The re-internment site was kindly provided by J Sainsbury plc to whom the Jewish community is most grateful. The ancient cemetery approximated to the present day car park area.”

The JS Journal reported on the reburial ceremony in 1984 “A medieval cemetery discovered during the construction of York supermarket and Homebase has recently been re-sited adjacent to the store’s car park. The graveyard, believed to have dated back to the 12th century was unearthed when the foundations were being prepared for the car park. Records indicated that the remains were of Jewish origin and before excavation could be carried out permission was obtained from the Home Office in close liaison with the Chief Rabbi, Sir Immanuel Jakobovits... Re-burial commenced on Sunday, July 8, at 8.30am under land that will be laid out by JS as a commemorative garden. At 4.00pm a short open air service took place opposite the re-burial site... Trevor Baker of the JS Estates department represented Sainsbury’s at the ceremony. He said: the coffins were laid out in the ground in the same approximate relationship to one another as when they were originally excavated some 18 months previously.”

What follows is my memory of the events that led up to the ceremony.
It was known that there had been a Jewish cemetery outside York, one of only ten medieval Jewish cemeteries in England and that it had been in use from about 1177 AD until the expulsion of Jews from York in 1290. The whereabouts of this cemetery was uncertain, but the name of the road adjacent to our development site was Jewbury, and this was an obvious clue, but it may have referred to a route or ancient track leading to cemetery elsewhere.

I commissioned the Yorkshire Archaeological Trust to dig trial trenches and they discovered human remains, evenly spaced, and they estimated there were 5,000 burials. Surprisingly they were aligned to the northwest, unlike the modern Jewish practice of orienting cemeteries east, towards Jerusalem.

I made contact with the Rabbinical Court of Beth Din in London and arranged to meet two of their representatives off the train in York and accompanied them over the site. Maybe they were expecting a peaceful setting. What they saw was a building site with trenches, machinery and decontamination equipment. During the Victorian period until after World War II, part of the site had been a gas works and the ground was highly contaminated with toxic waste. Protective clothing had to be worn in some areas.

The Rabbis were visibly stunned. Perhaps it was not a good moment for the architect to describe the development proposals. We were planning to drive piles into the ground to support the proposed car park. The architect described how these piles would “gently” displace the bodies as they were driven through the burials. The Rabbis were shocked. There was no way to retrieve the situation. The proposal to use piles as foundations was abandoned and instead we opted to excavate trenches to be filled with concrete strip foundations.

A team of 20 experienced archaeologists and students supervised by The Yorkshire Archaeological Trust removed about 500 remains between February and May 1983. These were taken to the York University campus for study and were later transported to a synagogue in Newcastle in preparation for re-internment in the memorial garden adjacent to the Sainsbury car park.

As the day of the reburial ceremony approached, I telephoned my contact at Beth Din and asked about protocols, and whether there was anything I should wear out of respect. I was reassured that nothing special was required, but if I wanted to, I could wear a hat. A day or so before my trip to York, I visited Moss Bros in Covent Garden to buy a black trilby hat, but the only one suitable was too small.

I informed the shop assistant that it was for a Jewish burial ceremony and had he something else. He said there was nothing else in stock, but, being Jewish himself, he assured me that the hat I had chosen was suitable and the crown could be stretched on a machine. When he returned he said “Was he a close friend of yours?” I said I didn’t know them. He said “More than one burial then?” Without thinking I said “Five hundred of them.” Rather embarrassed, I purchased the hat, even though it did not fit.

The ceremony took place on the grass embankment opposite the supermarket car park. The chief Rabbi, Sir Immanuel Jakobovits was very nice, and if he thought my hat was a little strange, he did not mention it. The boxes containing the remains had already been lowered into the ground and Sir Immanuel presided over prayers and readings from the Bible.

My wife and I stayed nearby overnight, and during the early hours of the morning there was a violent storm. The south transept of York Minster was struck by lightning and gutted by fire. Some people blamed this on the Revd David Jenkins, the Bishop of Durham who had questioned the truth about the virgin birth, but when I returned to the office in London my colleagues blamed it on me. 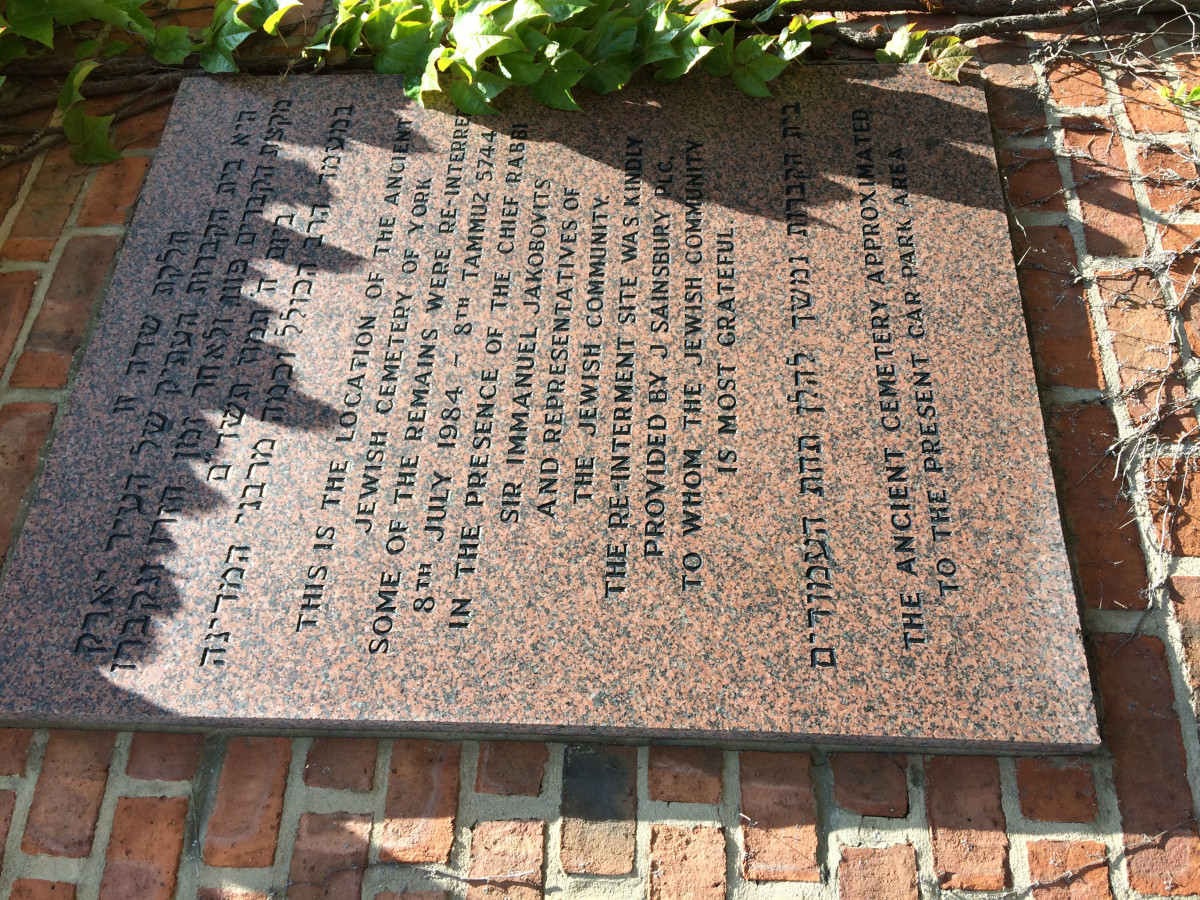