Text: 'Sainsbury's - The reputation which J. Sainsbury enjoys as a purveyor of high-class provisions, poultry, and game, accounts for large businesses done in all his London and provincial shops. Housekeepers in Norwich and...
Read all
Store - opening Advertising 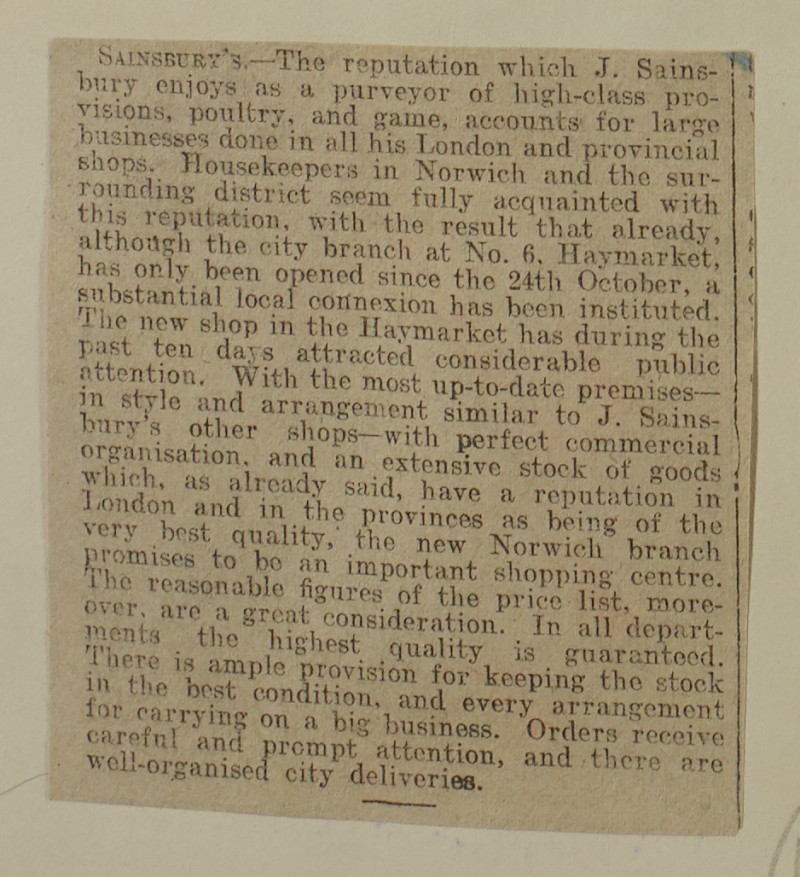 Text: 'Sainsbury's - The reputation which J. Sainsbury enjoys as a purveyor of high-class provisions, poultry, and game, accounts for large businesses done in all his London and provincial shops. Housekeepers in Norwich and the surrounding district seem fully acquainted with this reputation, with the result that already, although the city branch at No. 6. Haymarket, has only been opened since the 24th October, a substantial local connexion has been instituted. The new shop in the Haymarket has during the past ten days attracted considerable public attention. With the most up-to-date premises in style and arrangement similar to J. Sainsbury's other shops - with perfect commercial organisation, and an extensive stock of goods which, as already said, have a reputation in London and in the provinces as being of the very best quality, the new Norwich branch promises to be an important shopping centre. The reasonable figures of the price list, moreover, are a great consideration. In all departments the highest quality is guaranteed. There is ample provision for keeping the stock in the best condition, and every arrangement for carrying on a big business. Orders receive careful and prompt attention, and there are well-organised city deliveries'.